As I walked off of the airplane the first thing, I noticed was the smell. It was like nothing I had ever smelled before.  I have no words in my vocabulary that would adequately describe the stench, except that it was a stench.

The second thing I noticed was the heat, an unbearable searing heat.  The temperature change was so drastic as I walked off of the cool airplane and into that hot dry air that I found it almost hard to breathe.  Then when I got somewhat used to the heat and able to take that first deep breath the stench was so bad, I didn’t want to breathe.

We landed in Cam Ranh Bay (pronounced Cam Ron).  It’s a port city somewhere in the middle of South Viet Nam.  Here was located the replacement center, or Repo Depot as we called it. This would be my home until I was given my assignment, the unit I would serve with while doing my part to fight that “crazy Asian war.”

There was only one unit that I really wanted to serve with and that was the 173rd Airborne Brigade (separate).  The 173rd was one of only two units in the Republic of Viet Nam (RVN) that was on jump status.  The other was 5th Special Forces, and I knew I had no chance of going there.  I made up my mind, I wasn’t going anywhere but the 3rd Herd as the 173rd was known.

On the plane load of guys that I went to Viet Nam with were 60 of us who were airborne qualified. I sure didn’t want to go into combat with anyone who was afraid to jump out of a perfectly good airplane while in flight.  I had made up my mind to go home at the end of my tour. I wasn’t going into the jungle with a bunch of “Legs” (non-airborne guys).

Every day, for four days, we would crowd around a bulletin board in hopes of finding our names on the list of guys going to the “Herd.”  The first two days we knew it was too soon to find our names on any list, but we checked anyway.  We began counting all of the names that were going to the “Herd”.  We were worried the 173rd would get their share of replacements before we could be assigned there.

During that first four days at the Repo Depot, I gained invaluable knowledge and experience that I would need to survive in a war zone.  I learned what a “piss tube” was for.

On that first day in country as we were being led to our barracks, I noticed these tubes sticking out of the ground.  They were about three feet tall and canted at a 60-degree angle.  They were about 3 feet high and had gravel at their base. They were in groups of two or three, just sticking up in the middle of the compound. Off in the distance I could see someone standing near one, but I couldn’t tell what he was doing.

I asked someone what they were.  They told me they were “piss tubes,” you pee into them.  “You mean you just stand out in the open and pee in front of everyone in the world to see?”  I had spent a lot of time camping in the woods and when you pee you do it behind a tree or a rock, not out in the open.  I took me while to get used to it, but I eventually did.  After a few months I got used to doing a lot of things I would never do when not in a combat zone.

Another thing I learned at the Repo Depot was how to dispose of the tons of human waste that is accumulated every day.  We burned it. We called it burning shit, because well… Situated throughout the camp were outhouses. Instead of the waste falling into a hole under the seat it was deposited into 55-gallon drum cut in half.

At the back of the outhouse, or “shitter”, was a small door.  Open the door and there was the half of the 55-gallon drum.  Every morning the full can was removed and replaced with an empty one.  Diesel fuel was then poured on top of the waste and lit on fire.  The diesel would burn the waste, but only the top layer.  In order to burn all of the waste it had to be stirred. I know it sounds disgusting, but try to picture this.  You’re standing out in the open; in almost unbearable heat stirring flaming feces until it is reduced to ash. It was not fun and I didn’t like to do it. Fortunately, I was not made to do it very often.

On the fourth day, the list with my name on it, was posted.  All but five of us would be going to the 173rd Airborne Brigade (separate).  Soon I’d be on my way to Sharang Valley, Vinh Dinh Province, RVN (Republic of Viet Nam). An important wish had come true. I was very happy.  I was going to be an Airborne Infantryman.  I was going to make an extra $55.00 a month for being willing to jump out of a perfectly good airplane while in flight.

The next morning, I was headed north on highway QL1 and into the biggest adventure of my life, but that’s another story. 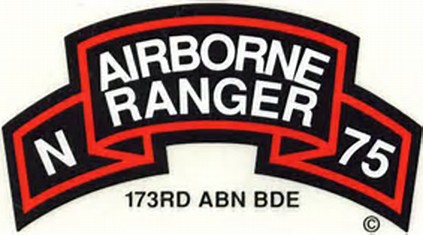