A few weeks after arriving in Viet Nam the monsoon season began. It started to rain. It rained every day for weeks. I hated the rain.  We were always wet.  The only place you could go to get dry was in your hammock. It took hours laying in your hammock before you would be completely dry.

In our “hootch” we had a transistor radio which was hooked up to a PRC-77 battery.  That radio played 24 hours a day, every day for as long as I was in that hootch.  It got so it was a comfort to hear it playing.  We only had one station to listen to, the Armed Forces Network.

Since there was only one station to listen to it played a variety of different types of music.  The programs were divided into two-hour slots.  Two hours of rock, two hours of oldies, etc.  At 2pm every day they played country music.

Every night around 1 am they would play soft, easy listening music. The program was hosted by Pete Smith.  He would play three songs in a row, then tell you the names of the songs he had just played.  He had a very soft voice which was pleasant to listen to.

I always tried to time it so I would get off guard duty when his program would come on. I loved falling asleep listening to the soft music. Most nights we could hear gunfire off in the distance.  The contrast between the two was disquieting at first, however it wasn’t long before the sounds of the gunfire became comforting to me.  Hearing the sounds of war in the background meant the war was being fought somewhere else, not where I was.  I didn’t mind fighting the war in the daylight so much, it was fighting during the darkness I didn’t like. Strange, I know, but the sound of the gunfire and the soft music became a lullaby to me.

During the monsoon it was difficult to get resupplied since the helicopters couldn’t fly in the rain.  The roads were also too muddy for the trucks drive on.  When we were resupplied, it was only enough to last four days. When our food ran out, we would get hungry.  We had a 55-gallon drum on our compound where we threw all of our extra “C rats”, the one we didn’t like. The ones like beans and meatballs, pork slices, pork and lima beans.  When we didn’t get resupplied on time we would reach into the drum and pick the least objectionable meal to eat.

On one rainy morning we got a mission to pick up the new platoon leader for 2nd platoon.  Since our platoon position was the one nearest the road (highway QL-1), we were sent to meet him on the road.  We would then take him to our position where 2nd platoon was to pick him up and take him to his new home.

After walking for about an hour in ankle deep mud we came to the Bon Song River.  Just on the other side of the river was the town of Phu Me and an elementary school where we were to pick up the 2nd lieutenant. There was only one problem; we couldn’t find the bridge that crossed the river. The river had risen about three feet higher than the bridge. After looking for about 15 minutes we finally found the bridge and crossed to the other side of the river.  It was a very difficult trip since the bridge was made of bamboo and was only about 3 feet wide and completely covered in muddy water that was moving quite swiftly.  I had a harder time crossing the bridge as I was carrying the radio.  The radio weighs about 25 pounds, and don’t forget I still had to carry my rifle and ammunition.

On the opposite side of the river the bridge made a sharp turn to the left and then sloped down to the river bank.  As soon as I saw the lieutenant, I was shocked by how young he looked. I had been in country for about six weeks and was all of twenty years old, but this guy looked as if he was sixteen. Being dressed in a brand-new uniform, he certainly didn’t look like warrior.  He looked like a snot-nosed kid.

We met up with the lieutenant and his two escorts on the river bank behind the school.  The escorts got back in their vehicle and left the area.  We started to walk to the bridge.  As soon as we got there, we started taking gunfire from the rear of the school.  We couldn’t fire back for fear of hitting one of the school kids.

This was typical of the Viet Cong. They would shoot at the American soldiers from within the villages, schools, churches or anywhere else we couldn’t shoot back.  This is one reason the war was so long and tedious, and ultimately unsuccessful.  Americans did not fight this way.  It seems so un-American to shoot at what appears to be civilians.

After waiting about ten minutes or so we decided to attack the school. We sent a few guys around to the south and as few more to the north.  The rest of us moved to the east.  Our plan worked the enemy fled through the hole we left them to the west.    We got rid of them without firing a shot or risking any of the school kid’s lives.

I was shocked to say the least.  One of the first things you are taught at jungle school is to do exactly what you are told when it comes to walking in the jungle.  If you are told to “walk where I walk” that means to step in my footsteps.  Here was an officer who was floating down river because he ignored that most important rule.

I walked back to where the lieutenant was bobbing up and down in the muddy river.  I could see that he was taking large gulps of water every time his head went under the water.  He had already dropped his rifle and was trying to get rid of his rucksack before it filled with water causing him to drown.  I told him to pull the quick release on his shoulder straps, but he was not listening to me, he was beginning to panic.  I thrust out my rifle for him to hold on to so I could pull him to shore.  As soon as he took hold of my rifle, he pulled me into the water with him.  The first thing he did was grab me. As I pushed him away from me, I pulled the quick release on his rucksack.  Once his ruck fell off his shoulders, he was able to swim to shore on his own.  I pulled the quick release on the radio I was carrying.  I swam to shore holding on to it in my left hand while holding my rifle with my right hand.

Our next task was to retrieve the lieutenant’s rifle and rucksack from the bottom of the river.  Bruce Bradbury was the first to try. After about four dives, he came up with the rucksack but couldn’t find the rifle.  Everyone else tried diving into the river but couldn’t find it in the muddy water.  We were just about to give up when I decided to give it a try. Up until then I didn’t have to try as I had already swallowed my allotment of muddy water for the day.

I walked back up onto the bridge where I had first seen the lieutenant bobbing up and down.  I dove in head first and swam to the bottom of the river.  The water was about 15 feet deep.  Keeping my eyes and mouth closed as tight as I could, I began feeling around for the rifle.  I stayed down as long as I could. I was about to give up when I found it.  The rifle was stuck in the mud butt first with its barrel sticking straight up in the water.  I grabbed the gun and headed for the surface.

The lieutenant didn’t even say thank you. I had saved his life and found his rifle and he didn’t even appreciate it.  A few weeks later I heard that he had been injured and sent home after stepping on a bobby trap.  I just couldn’t help but wonder what stupid thing he had been doing when he got wounded.

A true story as remembered by Ski Ingram 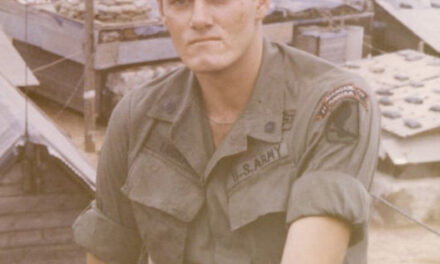