This is a continuation of my last article on Domestic Tranquility. The Preamble to our Constitution tells us the purpose of our Constitution is “to form a more perfect Union.” It goes on to list five principles to help ensure that America becomes a “perfect Union.”  These five principles are; (1) establish justice, (2) ensure domestic tranquility, (3) provide for the common defense, (4) promote the general welfare, and (5) secure the blessings of liberty for all.

It seems as if our present administration, under President Biden, is doing everything they can to ignore our Constitution, in particular the precepts outlined in the Preamble.  Human nature does not like chaos, upheaval, turmoil or confusion and that is what we are experiencing in America today. I do not see a place that feels safe and secure so there can be no domestic tranquility.

I see inflation, high crime, out of control gas prices, and the eroding of many of our rights, such as free speech.  I see a Commander-in-Chief who does not instill confidence. Like many, I see an old man who appears to be dazed and confused much of the time.

I hear President Biden saying reckless things such as; “spending does not cause inflation.”  “It’s Putin’s fault”, and while speaking to members of the 82nd Airborne Division in Poland he said, “when you get there (Ukraine) you’re going to see women, young people standing in the middle of a damn tank and saying I’m not leaving, I’m holding my ground.”

The first statement, about inflation, is completely false as history has taught us for many years. It’s out of control government spending that causes inflation. In his second statement he is trying to lay all the blame for today’s trouble anywhere except where it belongs, himself.  And lastly, was he telling the 82nd Airborne to prepare to go to war with Russia?  I hope not.

President Biden cannot control his thoughts.  He is sending out confusing messages to dictators in the world.  He told the world if Russia uses chemical weapons we will respond in kind.  Does that mean he plans to use chemical weapons? Against whom? He has said in the past that sanctions were meant to deter Russia.  Now he is saying that sanctions have never been meant to deter Russia.

President Biden’s speeches are not inspirational.  They are hard to understand. I never know what he is saying or what he means.  America may be on the brink of World War lll and our Commander-in Chief is making statements that are at odds with what he has said earlier and sometimes with what he said the day before. It’s not only embarrassing and unacceptable from the leader of the free word, but most importantly, very dangerous.  Recently North Korea has told the world that they are ready to go to war with America. Putin is threatening to use nuclear weapons in Ukraine.  Is it any wonder why Volodymyr Zelenskyy said on March 16th, “I wish you, (Biden), to BE the leader of the free world.”

I do not believe that this administration cares about you or me.  If they did, they would do something to control crime, the price of gas and the invasion on our southern border.  The first year of the Biden administration, more than two million people entered this country illegally. And those were the ones we know about.  I wonder how many were what we call “got aways?” They tell us that “they” are being compassionate to those who come here looking to improve their lives and families. How compassionate are they being to those people caught up in human trafficking or getting hooked on the drugs being smuggled across the border?  How compassionate are they to the children and babies left to die in the desert by a member of a Mexican cartel?

There are still calls to defund the police even though the crime rate in “blue” cities is out of control.  If the administration cared about people they would be concerned about the crime in our neighborhoods.  George Soros-backed District Attorneys are treating the police as if they are the criminals and the criminals as if they are the victims.  There are more than 800,000 police officers in America. How many of them commit crimes? Very few.  It is those who are being released from jail just hours after being arrested who are committing most of the crime.

I long for Domestic Tranquility.  It was only a short 16 months ago that America seemed to be on the right track. We had hope for a better world.  America was producing plenty of oil, so much that we were able to export it to other countries.  Today some European countries are dependent on Russia for their oil thereby helping to fund Russia’s war with Ukraine. There were no supply chain issues.  There was less crime in our cities and criminals were being prosecuted for the crimes they committed.

I believe our Constitution was inspired by God and written by men who loved mankind and believed that God would bless America. I have faith that most Americans believe this same thing.  I also believe that it’s a small minority, a very small minority, that believes otherwise. It is just unfortunate that they get most of the press making it seem as if there are more of them than there really are.

It is only six short months before our mid-term elections.  We must be unwavering in our believe that America is the best country on earth. We must continue to fight for our Constitution and our way of life, so I urge you to vote for the candidates who love America as much as you do. 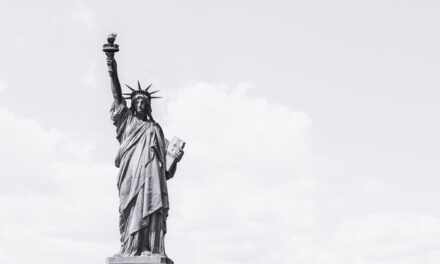