After I was assigned to lead Sergeant Luket’s squad I was a very happy warrior.  I was working hard as a Drill Sergeant teaching infantry tactics to young men who wanted to learn how to be a warrior like all of the combat veterans. These men had been to Jump School before coming to us.  They made their 6th jump, known as their “Cherry” Jump, shortly after they began training to be the best trained infantry soldier known to man, a paratrooper with the 101st Airborne Division.

While in Jump School learning how to jump out of airplanes you are very closely supervised.  When jumping there are “Black Hats’ (instructors) on the ground reminding you to do what you learned in school before you hit the ground. When you are making your “Cherry Jump” you are on your own.  There is no instructor, no one to remind you what to do. Some men are so afraid to make that 6th jump that they refuse to jump after getting on the airplane.  When they get to the door, they have to be literally kicked out the door by the Jump Master. Once safely on the ground they act as if they are the bravest of all paratroopers.  I was fun to watch.

The men in my squad were some of the best of the lot. They were ready and willing to learn and do anything I asked of them.  They were the complete opposite of Sergeant Frisbee’s squad.  I didn’t know who I felt sorrier for, Sergeant Frisbee or the men in his squad. Sergeant Frisbee was a former Green Beret who had served five tours in Viet Nam.  He was one of the best a few years before, but now he was burned out and he drank too much.  He didn’t spend the time teaching his men like the rest of us.  It was so bad that his men became an embarrassment to the rest of the company.

At the end of training each squad was tested on what they had learned by going on a four-day exercise.  In many cases each squad was pitted against each other during these war games.  For example, one squad would be tasked with setting up an ambush and the other squad was to be patrolling on a road and then react properly if and when they were ambushed.

One night my patrol was ordered to move from one place to the next by travelling on a certain road.  We felt sure that one of the other squads would be ambushing us.  We learned later that it was Sergeant Frisbee’s squad who was assigned to be the ambushers. When we arrived at the location of the ambush one of Frisbee’s men began to repeat the password, which was “pretty” from his hiding place on the side of the road

Our whole squad stopped in its tracks knowing that they were about to enter an ambush kill zone. They knew they were going to get ambushed but they didn’t know which side of the road the ambush would come from.  Again, we heard the password “pretty.”  After not receiving the countersign, Frisbee’s squad member walked out onto the road to meet us while repeating the password over and over again “pretty, pretty, pretty”.

Even though Sergeant Frisbee was a Green Beret and a combat veteran he did some pretty dumb things on occasion.  He had been in the Army for at least 10 or 12 years and was still a Sergeant E-5.  He should have been an E-7 or at the least an E-6.  It only took me five years to make E-6.  He was an alcoholic and was forced to attend AA meetings.  They were held in the NCO club an hour before the club opened for the day.  After the meetings many of the attendees, including Frisbee, would have a beer or two before going back to work. It was an insane time.

One day Frisbee invited me to his house for lunch.  I didn’t know it at the time, but he didn’t tell his wife, a very small Vietnamese woman, that I was coming.  As soon as we entered his house, I could tell his wife was not happy.  She began to yell at him in Vietnamese.  I recognized a few of the Vietnamese swear words she was using.  We were in the living room talking when Frisbee’s wife brought out ham and cheese sandwiches for us. They were two pieces of bread with a slice of ham and a slice of cheese in the middle.  There was no mustard or mayonnaise on the sandwiches.

Frisbee yelled to his wife, who was in the kitchen, to bring him some mustard.  I could hear her say something in Vietnamese to which Frisbee replied to her in Vietnamese. She walked out of the kitchen with a jar of French’s mustard in her hand.  She walked up to Frisbee and hit him in the head with the bottle. The bottle broke and a whole jar of mustard spilled all over him and his uniform.  Frisbee didn’t say one word.  He got up, left the room and changed his uniform.  When he return he said “time to go”.  I finished my sandwich in the car on the way back to Fort Campbell and not another word was said about the incident.

One of the things I taught my squad to do was exercise stealth to sneak up on soldiers who were in a defensive position in the field during war games. If the unit does it right, they will dig foxholes around a perimeter with crew serve weapons (machine guns) in strategic locations in order to defend against an attacking force. The men in my squad became very good at sneaking past the opposing forces early-warning positions and into their perimeter.  They won many a battle that way.

Another sergeant in the company was Ranger Mike Chaney. He had served with Company “C” Airborne Rangers in Viet Nam.  He was a very good soldier and very good leader.  Every one of our new recruits had joined the Army with a guarantee that after training they would serve with the 173rd Airborne Brigade, which was in Viet Nam at the time.  The problem for them was that the 173rd had come home from Viet Nam before they got out of Basic Training. They were very disappointed when they were sent to the 173rd at Fort Campbell Kentucky instead of Viet Nam. One morning Ranger Chaney started a rumor that our First Sergeant, Jerry Jungles, was asking for volunteers to go to Viet Nam.  Within a few minutes almost every recruit was standing at Sergeant Jungles door asking to be transferred to Viet Nam.  First Sergeant Jungles was not a happy camper.  He demanded to know who had started the rumor. He never found out.

Before we left for West Point our division conducted a large field problem to test the readiness of all the commanders and their units.  The field problem lasted 10 days.  I won’t go into details here, but will say that my squad was recognized as the best squad in all of the 101st Airborne Division. I was given a very nice certificate from the division. And Captain Epps, our Company Commander, told me he was going to give me a plaque as a reward after we came back from West Point.  I never got the plaque as Captain Epps was killed before our return, but that’s another story.

In 1974, I was sent to West Germany.  I was assigned to Headquarters Company 3rd Brigade of the 3rd Armored Division as a TOW weapons platoon sergeant.  I was a trained Airborne Infantryman. I was not a mechanized infantryman and I knew very little about TOW missiles. I had a lot to learn.

When I arrived at my new unit, they were on maneuvers at Hohenfels training area in Bavaria, West Germany. Our company was given the mission to attack a hill that another unit was suppose to defend.  Once our attack was to begin, the defending unit was to retrograde (retreat) off of the back side of the hill they were on. My platoon was at the bottom of the hill waiting to attack at dawn.  I was very bored.  I was telling some of my men that it would be pretty funny if someone snuck into the enemy’s perimeter before the attack began and sabotaged a few of their vehicles. Everyone agreed that it couldn’t be done and whoever tried would be caught. I took that as a challenge and began to slowly creep up the hill.

I was able to get past their early warning posts and then to the top of the hill.  I crawled underneath a number of tanks and APC’s (Armored Personnel Carriers).  I tied the booby trap simulators to their tracks and also the bottom of the vehicles.  I then snuck into the headquarters area and was able to listen to the commanders plan the morning’s mission.  It was great fun.

At dawn the attack began.  I was sitting on top an old brick building that I’m sure was built before World War ll.  I had a perfect seat in order to watch the whole attack.  As soon as the defensive unit began to back their vehicles off of their perimeter the booby trap simulators that I had tied to them exploded. Now there was chaos in the perimeter. Our company attacked up the hill.  Many of the vehicles that were to retreat were put out of commission.  I thought I had done a great job destroying the enemy. The officers in the opposing force were not happy as they were caught with their proverbial pants down.

I was told to never embarrass a unit like that again.  I didn’t care.  Everyone now knew who I was and what I could do.  Training would have to get better from now on. Later the 3rd Armored Division conducted tests to evaluate the readiness of the Division.  Again, my platoon was recognized as the best TOW platoon in the Division. That recognition helped to get me out of the 3rd Armored Division and assigned to the 7th Army Training Command.  I was assigned to Hohenfels Training area as the new TOW weapons expert.  My job would be to supervise all training and safety on the training area.  I was also given the task to design the Army’s first TOW live fire range in Germany. I was also assigned as the Explosive Ordinance Demolitions Sergeant which was one of the best jobs I had while in the Army. 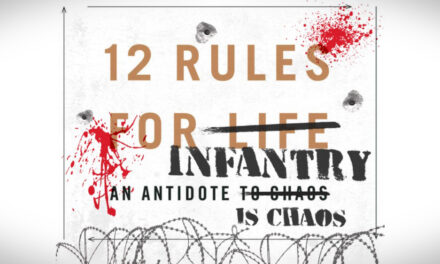 12 Rules For Infantry (An Antidote is Chaos)