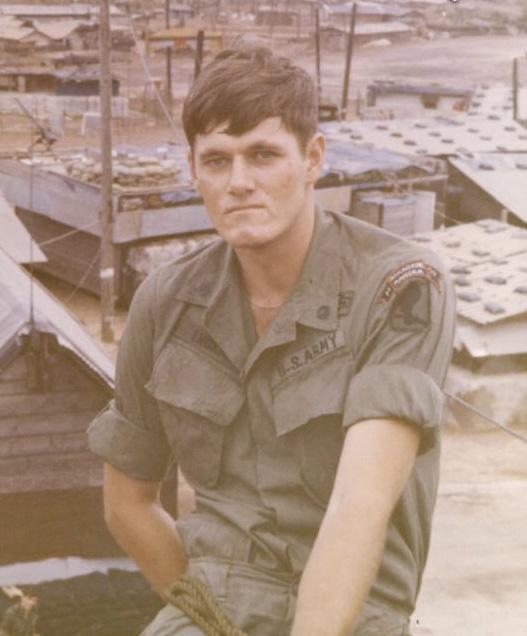 With Veterans Day passed and the holidays approaching I’ve been thinking about the Thanksgiving Day I spent in Viet Nam 51 years ago.  I have had a few life and death experiences, but this was not one of them.

I arrived in Viet Nam in September 1970.  My first assignment was with Charlie Company 1st Battalion of the 503rd Infantry, 173rd Airborne Brigade. My platoon was assigned to a small hilltop overlooking some rice paddies about a mile east of the village of Phu My (Fu Me) in II Corps.

Life was hard and very uncomfortable.  We slept in a hole in the ground that was covered with PSP (pierced steel plank) with sand bags stacked on top.  There was no running water and the food was mostly C-rations, cold rations at that.  Once a week we were re-supplied by helicopter.  Among other things we got clean clothes and a hot meal from the mess hall.  The hot food was not great, but at least it was hot.

As it got nearer to Thanksgiving Day we were all looking forward to a better meal in the jungle.  We all anticipated having a traditional turkey dinner. We all talked about what else we might have for dinner. We were hoping for sliced turkey, stuffing, potatoes and gravy, sweet potatoes, and pumpkin pie just like we all had at home on the holiday.

The day started as every day started, with a morning patrol. An afternoon patrol was scheduled for later that day.  If you went on the morning patrol you were required to go on an ambush that night. Those who did not go on the ambush were required to be on guard duty throughout the night.  When we were not on patrol, we were improving fortifications, digging trenches, filling sand bags, and clearing lanes of fire (removing obstacles that the enemy could hide behind if or when they attack), just to name a few.

My job on Thanksgiving Day was to fill sandbags with Chris. Chris was from the small town of Salina, Utah.  He had been a deer hunter his whole life and he was in Viet Nam to hunt the Viet Cong. There are two parts to the job of filling sand bags. One man holds the bag open while the other man fills it with sand.  The hardest job was digging the sand and putting it in the bag. It was easy to hold the bag. For some reason I don’t understand why, both Chris and I wanted to fill the sand bag instead of just holding it.  We began to fight over the shovel.  We would wrestle each other until one of us would be so tired we couldn’t hold on to the shovel any longer.

The person who won the fight would fill sand bags until the loser was rested enough to try to wrestle the shovel away from him. We did that for hours.  We only stopped when we heard the re-supply helicopter coming with our Thanksgiving dinner. Chris and I ran up the hill to help unload the food.  The first thing I saw was Chaplain Burger getting off the helicopter.  He was a Catholic chaplain who had visited before.   He would always come on a re-supply day.  He would give a gospel message before we were allowed to eat and then ask to borrow an M16 so he could shoot at empty C-ration cans.

After unloading the cans of food, we waited while Chaplain Burger gave us a gospel message about Thanksgiving.  I don’t remember a thing he said as my mind was only on the meal waiting for us.  After what seemed like hours Chaplain Burger stopped talking and it was time to eat.

Well, the meal was not what I had expected.  The turkey was dry, the gravy and potatoes lumpy and the pumpkin pie was very thin and didn’t taste very good, but it didn’t matter.  For a few moments the war was forgotten and we were all celebrating an American holiday. We were all together eating turkey and talking about our Thanksgivings at home.

We used the time to get to know and appreciate each other better. We were all very thankful that we were still alive and even though we were in a jungle, in a war zone, we were working with some of the best men in the army. Every one of us a trained paratrooper with the 173rd Airborne Brigade, the best trained infantry unit in the world.  We were in Viet Nam doing what we were trained to do and loving it most of the time.

After dinner I loaned Chaplain Burger my M16 and let him shoot at all the cans he wanted. At little later the re-supply helicopter returned to pick up Chaplain Burger and the empty insulated food containers. It was then time to go back to doing what we were doing before dinner, fighting the war. Chris and I went back to filling sand bags and fighting over the shovel.  It turned out to be a good Thanksgiving Day in the Republic of Viet Nam.