I am one of the millions of Americans who is very concerned about the anomalies in the last Presidential election.  I will not go into why I believe there were problems because it will do no good.  Those who believe that the election was fair and above board will not be convinced otherwise and those who agree with me do not need further discussion on the issue.  I will say this, I am very worried for the sovereignty of our nation.

In the past year I have spoken about the lack of domestic tranquility, tumult, the evils of socialism, the loss of rights under the cover of Covid-19, the lack of patriotism, the dirty tricks being committed by the Leftists, the upheaval and turmoil in the country, and how so few citizens today believe in American exceptionalism.  Along with so many other Patriots, I have sounded a warning about what was about to happen and now we see that it has.

I have been asked by more than a few people to write about positive things, topics that uplift instead of those that depress. I have been told that I should just be a “good citizen” and wear a mask.  After all we don’t want to be rebels, do we?  Well, I do! I choose to be a rebel. I will fight the best way I know how in order to preserve the rights and freedoms that so many patriots have fought and died for.

It is so easy to become disheartened.  Too many people think that America is on a slow boat to China. I have read the book “1984” and have seen the movie a few times, and I see too many parallels, but we are not there yet.  America is not yet finished nor will it ever be.

It is also the time to realize that we, as patriots have a target on our back.  When I say it’s time for us to fight, I do not mean to get in physical altercations with anyone.  I want to make that crystal clear. Let no one misunderstand my intention.  Some on the Left need to demonize those who do not agree with them because they cannot win an argument using truth. They hide behind insults and misrepresentations because they know that evidence will expose the truth.

President Trump spent the last four years making America great and “draining the swamp.” He succeeded in his first goal but failed in his second. Too many career politicians on both sides of the aisle resisted his efforts. I won’t list how he made “America Great” because those who love Trump know and will always remember. Those who hate Trump and hate America will always deny his success and always distort America’s history in hopes of convincing others that America is not a great country and never was.

Joe Biden has been sworn in as this country’s next President.  His administration will be the antithesis of President Trump’s. Biden has stated that he plans to reverse the Trump tax cuts and impose more taxes. He wants to spend $1.9 trillion dollars on Coronavirus aid. This includes bailing out Blue states who have mismanaged their economies.

Biden has signed executive orders to rejoin the Paris climate accord, impose a mandatory mask mandate on federal property, and suspend student loan payments and prevent evictions and foreclosures during Covid recovery.  He plans to fast track citizenship for illegals and impose the Green New Deal.  Biden is also going to work on criminal justice reform because he believes there is systemic racism in America.

The new President states that he wants to unify Americans, but he is doing nothing to signal that he will.  The Left wants to punish every person, every citizen, who worked for or with President Trump and everyone who voted for him.  They are talking about reprograming the Trump supporters.  They talk about reeducating us because we are part of a cult that only worships Donald Trump.

Yes, we are in for a “bumpy ride.”  The next four years are going to be very difficult, but do not count the American people out.  It may take some time, but patriots will rise to the top as the Left argues with themselves.  Patriots and good Republicans will coalesce to form a bigger and better conservative party.

Patriots realize that we are in a fight for the soul of America. I thank President Trump for waking up the patriots of this country.  There are now more than 74 million people who understand what America stands for and why it is so important to maintain our freedom. Do not despair. These words were spoken by President Trump before leaving the White House. “As long as the American people hold in their hearts deep and devoted love of country, then there is nothing that this nation cannot achieve. Our communities will flourish. Our people will be prosperous. Our traditions will be cherished. Our faith will be strong. And our future will be brighter than ever before.”

Secure the Blessing of Liberty for All 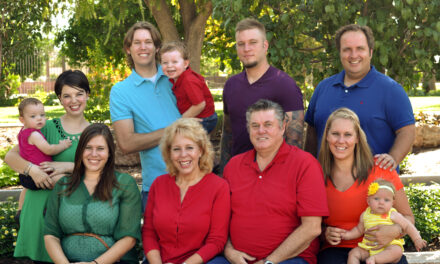